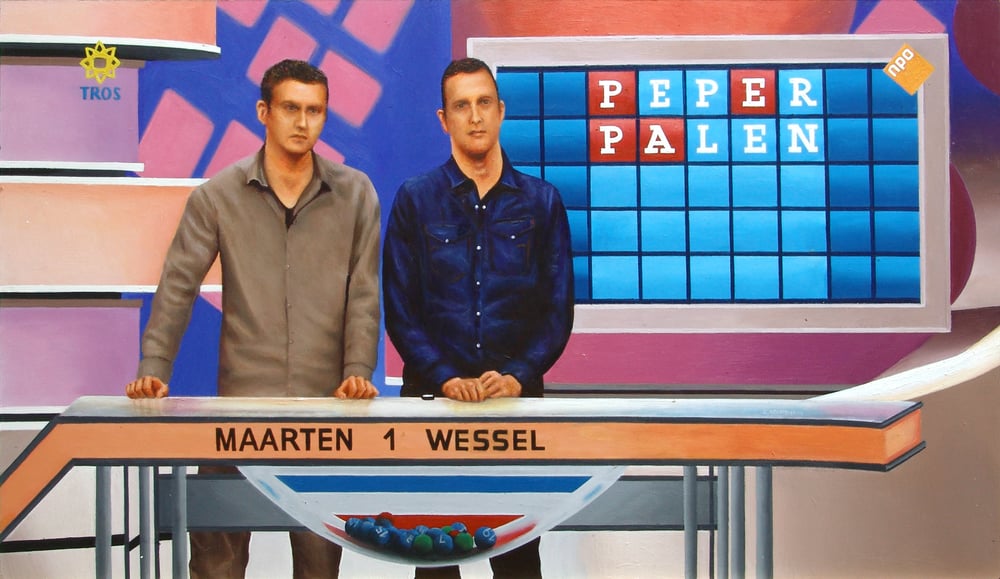 One night while watching television I stumbled upon this gameshow called Lingo where two teams have to guess a word within a maximum of five turns. Here you see team 1 with candidates Maarten and Wessel trying to guess a five letter word that starts with a 'P'.

I thought it would be a great idea to freeze time and just quietly observe what I was watching: two guys standing behind a desk filled with balls in a candy colored environment playing a silly game on national television for my enjoyment.

I thought it was pretty interesting to transfer an image from one media (television) to another (painting). Tv reality now became painting reality and to me that makes a huge difference.

This scene also reminded me of something that social critic Neil Postman once wrote in one his books. He said: 'A culture fully dedicated to entertainment becomes a trivial culture. Culture death becomes a clear possibility.'

So I also view this painting as a warning sign of the dangers of too much entertainment. Too much of it reduces us to passivity and egoism. At least that's how I feel about it.

Gameshow is an original, 100% handmade painting and comes with a hand signed Certificate of Authenticity. The painting is signed at the back and front. An installment plan is possible to spread payments over a convenient length of time.

Shipping takes about two weeks no matter where you live in the world. You'll receive your painting safely packaged and ready to install immediately.

Please feel free to contact me anytime if you have any questions. I would be happy to answer all of your inquiries personally.

If you feel this painting is exactly right for you just hit the buy now button and it's yours!